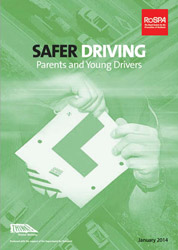 Safe Driving Agreements are flexible and tailored to individual circumstances. They can be verbal or written. They are not about being over-protective or unreasonable but are promises between the parent and the young driver for safer driving during the initial high risk period while the new driver builds up their experience. They can be used to support telematics insurance if the new driver has such a policy.

An example agreement is available at RoSPA's Parents and Young Drivers Agreement (PDF).

Agree with your son or daughter some or all of the following:

Young drivers are more likely to crash at night, so consider agreeing between you that the young driver will not drive between midnight and 6:00 am. The exact times can be relaxed as their driving experience increases.

Consider agreeing a limit on the number of their friends they carry if you are not in the car. Passenger numbers can be increased gradually as experience is gained.

Ask the young driver to stick to a zero limit when driving. Ask them not to take a lift with drivers who have been drinking or might have taken drugs. Set a good example yourself.

Young drivers are particularly prone to approaching bends too fast and to dangerous overtaking. Even keeping within the speed limit can be unsafe, for example on wet or icy roads or on narrow, winding rural roads. Discuss these risks with your young driver.

Most young drivers will have a mobile phone. Whilst it is reassuring for them to carry it with them (in case they need to contact you), it is dangerous to use it whilst driving. Ask your son or daughter to agree only to use their phone whilst parked.

Discuss other distractions, like playing loud music, eating, drinking and smoking to ensure they are aware of the increased risk of doing other things while driving.

Most drivers wear seat belts, but rear seat passengers are less likely to do so. They present a danger to themselves and to other people in the car. Drivers could agree to always ask their passengers to wear their seatbelts. Set an example and always wear yours.

Green 'P' 'plates can be displayed to indicate to other road users that there is an inexperienced driver at the wheel.